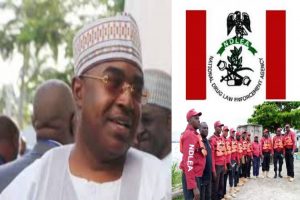 Brig. Gen. Mohamed Buba Marwa (Retd), Chairman/Chief Executive Officer of the National Drug Law Enforcement Agency, NDLEA, has urged all those currently participating in the illicit drug trade to turn a new leaf or risk losing their freedom and assets in the new year.

In his New Year’s greeting, the anti-drug czar stated that the NDLEA and its workforce will enter 2022 “with a resolve to rid the country of illicit substances and to continue our active pursuit of drug cartels, barons, and traffickers wherever they may be within the country or even outside.” “Given our pedigree in 2021, there should be no doubt about our capacity to achieve these stated targets,” he said. We’ve increased our capability and re-energized our anti-narcotics efforts in the last year. Arrests and interdictions have resulted from our actions. That should be a strong indication to anyone involved in the drug trade that the game has changed.

“Our goals for 2022 remain the same: to dismantle drug cartels and syndicates, which includes capturing and incarcerating drug criminals in a court of law, and eventually to clear our society of all traces of illicit narcotics.”

“There is still a window of opportunity for drug traffickers and barons: Now is the time for them to turn over a new leaf before NDLEA turns up the heat and they lose it all,” Marwa added, while leaving open a window of repentance for those in the trade. Because the majority of them are in the business to acquire wealth and have now made fortunes from a trade that affects society, it is time for them to retire. We implore them to consider the common good, the country’s destiny, and the young and future generations. Allow common sense to prevail, and make a substantial contribution to the struggle to create a drug-free society where peace and harmony reign. We have witnessed the devastation of illicit drugs in the form of unsightly developments in sections of our country as a result of juvenile drug usage, as well as the general blight produced by cannabis abuse across the country.

“Those who hear this warning will thank themselves in the days ahead for making the prudent decision to leave the drug trade.” Those who think and act differently will have a difficult year in 2022. They can learn from what happened in 2021, when the Agency achieved various jail terms for over 1,200 drug traffickers, including foreign nationals, and brought six drug barons to justice, including those who were outside the country and had been on the run for as long as ten years.”

Gen. Marwa emphasized Nigeria’s intention to win the drug war, saying the NDLEA will leave no stone unturned to complete its mandate in 2022, with the full support of President Muhammadu Buhari, the National Assembly, the Judiciary, and the citizens. “The Agency enjoys the public’s full support in this effort against drug misuse and illicit substance trafficking. The White House is fully behind NDLEA. Legislators are providing the Agency with the necessary clout. And, as recent events have demonstrated, drug traffickers and barons have no protection in the legal system. Similarly, we have an excellent working relationship with overseas partners. As a result, individuals who deal in illegal narcotics can rest assured that the NDLEA’s extended arms will reach them, and they will suffer harsh legal consequences,” he added.

Mon Jan 3 , 2022
Share, like and Comment    The Lagos Waste Management Authority (LAWMA) has started removing trash from an illegal dumpsite at Tin Can Island Port on the Apapa-Oshodi Expressway, with the goal of cleaning up the axis. Since the operation began yesterday, at that spot, which had been turned into a […]