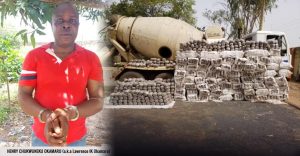 Wanted drug kingpin behind the 2000.6kg Cannabis Sativa seized in a concrete mixer truck in Adamawa State on 2nd December 2021, Henry Chukwuneku Okamaru (a.k.a. Lawrence Ik Okamaru) has been arrested in Ondo state after five months of search by operatives of the National Drug Law Enforcement Agency, NDLEA.

Two suspects: Matthew Donuwe and Friday Nmborgwu were arrested in connection to the consignment last December. They had confessed that the concrete mixer truck with Lagos registration number SMK 890 XB was loaded with the illicit drug in Ogbese, Ondo state while they travelled for two months on the road before arriving Adamawa where they were eventually arrested by NDLEA operatives.

Investigations reveal that Okamaru is one of the leaders of a cannabis cultivation cartel that operates in the Ondo-Ekiti axis, while he shuttles between Osun, Ondo, Ekiti, Edo and Delta State from where he coordinates supplies of illicit consignments to Northern parts of the country and Lagos State.

The drug lord has also been identified as a member of an international drug trafficking ring, while he shuttles between Nigeria and South Africa where he settles his family. He has firm control and stake in cannabis cultivation in Ondo, Edo, Ekiti, Osun and Oyo States with ample storage facilities in Lagos and Abbi in Delta State from where his consignments are distributed year-round.

Meanwhile, a 36-year-old Nigerian based in Italy, Nwakanma Michael Uche has been arrested at the Nnamdi Azikiwe International Airport, NAIA Abuja for ingesting pellets of heroin.

Nwakanma who hails from, Arodizuogu Village, Ideato Local Government Area of Imo State was nabbed while trying to board Air France Airline Enroute Abuja-Paris-Milan, Italy on Sunday 15th May 2022. He was thereafter kept under observation during which he excreted 95 pellets of the illicit drug.

complete his father’s traditional marriage rites. He added that he was to be paid N1.5million after the successful delivery of the drugs in Milan. 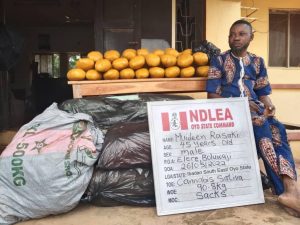 Across five states of Edo, Kaduna, Kogi, Akwa Ibom and Oyo, NDLEA operatives intensified their offensive action against drug cartels. In Edo, a pharmacy along Sapele Road, Benin, was raided on Friday 27th May following intelligence and prolonged surveillance. The owner of the store, Thaddeus Uliagbafusi, 58, was arrested while a total of 130,670 tablets of different controlled drugs, 1,396 ampoules of pentazocine injection and 743 bottles of codeine were recovered from a secret location where the drugs are repackaged. This followed a similar raid of a drug joint operated by Mrs Christianah Gabriel, 53, at Uromi, Esan North-East LGA, Edo State, who was arrested with 25kg cannabis.

While 15, 000 ampoules of pentazocine injection were seized by operatives in Kaduna along Abuja-Kaduna express road, 12,500 tablets of Diazepam were intercepted along the Okene-Abuja highway on Thursday 26th May. The drug exhibits were found inside a truck conveying motor spare parts from Onitsha, Anambra to Kaduna.

In Akwa Ibom, a female drug dealer, Irene Emmanuel Bassey was arrested on Saturday 28th May, during a search of her house at Ikpa town, Esit Eket LGA where 30.5kg cannabis was recovered, while one Muideen Rasaki was nabbed with 90.8kg cannabis at Elere, Boluwaji area of Ibadan South-East LGA.

While commending the officers and men of the Directorate of Intelligence, NAIA, Edo, Kaduna, Kogi, Akwa Ibom and Oyo state Commands of the Agency for the series of arrests and seizures in the past week, Chairman/Chief Executive of NDLEA, Brig. Gen. Mohamed Buba Marwa (Retd) charged them and their compatriots across the country not to relent in their offensive action against drug cartels and their kingpins.

June 1 Motorcycle Ban Enforcement: No Cause For Alarm

Sun May 29 , 2022
Share, like and CommentThe attention of the Lagos State Police Command has been drawn to a panic-laced message making the rounds on social media purporting those motorcycle riders in the state have concluded plans to disrupt social and commercial activities in Lagos State from June 1, 2022, in protest of […] 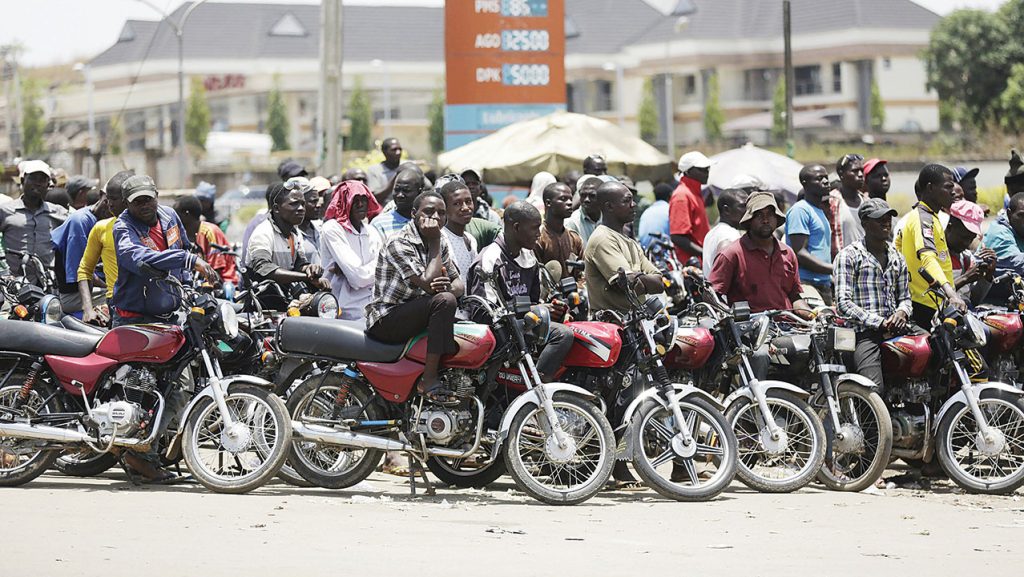