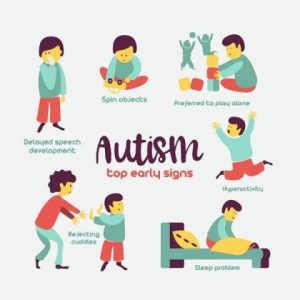 We don’t know what causes autism. There could be various reasons for this, including brain development and hereditary factors.

Autistic children’s brains grow quicker than typical during early childhood, particularly during the first three years of life. We have no idea why this rapid expansion occurs. However, it means that in autistic children, different areas of the brain communicate with one another in an unusual way.

Autism appears to have a hereditary foundation, according to the evidence. However, it seems doubtful that autism is caused by a single gene. It is more likely that numerous genes will combine and function in concert. Many probable genes that may play a role in the development of autism have been discovered by researchers.

Autism frequently manifests itself before a child reaches the age of two.

Signs include disparities in children’s social and communication development during the first year of life. Children who are later diagnosed with autism, for example, may:

not respond to other people’s smiles

Autism symptoms become increasingly visible during the toddler years when children are expected to begin talking and playing with other children. Autistic children, for example, may:

not want to play with other kids, repeat what they hear, and speak with a strange tone of voice
Some youngsters exhibit numerous early warning indicators, whilst others exhibit only a few. The amount of indicators varies according to the age of the child and the impact autism has on their daily lives.

Autism symptoms may be visible in older children and teenagers when they have trouble transitioning to new social settings in school, such as comprehending and obeying directions, establishing friends, and having age-appropriate interests.

Autism can be diagnosed at any age between 12 and 18 months, however, it is most commonly diagnosed around the age of two.

A multidisciplinary evaluation is used to diagnose a child after numerous doctors and professionals have tested and assessed him or her.

A multidisciplinary team often consists of a paediatrician, a psychologist, a speech pathologist, and, on occasion, a psychiatrist. Other practitioners, such as occupational therapists, may also be included.

These professionals may assess a child at the same time and in the same location. Alternatively, they could conduct individual exams in various locations over time. If the evaluation is conducted in this manner, the professionals will share and debate their findings.

There is no one-size-fits-all test for autism. Instead, the following criteria are used to make a diagnosis:

observing children as they play and interact with others – that is, how children are developing now – reviewing children’s developmental history – that is, how children have developed in the past interviewing parents
Autism spectrum disorder will be diagnosed in children. The diagnosis will include support levels ranging from “needing support” to “needing very considerable support.” These levels indicate how much assistance children require with their social-communication abilities, as well as restricted, repetitive, and/or sensory behaviours.

The language and cognitive abilities of children will also be evaluated by health professionals.

Concerned about your child’s development: what to do

It is critical to seek assistance and support as soon as feasible. Early therapy and supports are the most effective strategy to assist autistic children in developing and thriving. This is because they can assist autistic youngsters in learning the abilities they require for daily activities. Children who get early intervention may require less or no assistance as they grow older.

Fri Mar 25 , 2022
Share, like and Comment In furtherance of its role in promoting the sustainability and viability of Small and Medium-sized Enterprises (SMEs), Nigeria’s premier and leading financial inclusion services provider, FirstBank, will convene its SMEConnect webinar themed Leveraging Alternative Payment Methods (APMs) to drive revenue for your business at 11:00 am […]