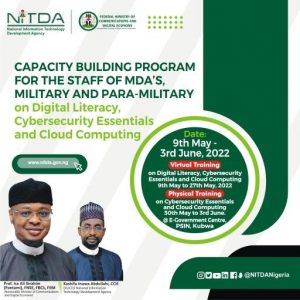 In view of the fact that digital technologies are changing the world at a faster pace than previously experienced waves of technological innovation and are reshaping and introducing new business models and sectors, the Director-General of the National Information Technology Development Agency (NITDA), Kashifu Inuwa CCIE, has reemphasized the need to have a digitally literate workforce, if Nigeria must succeed in accelerating the growth and modernization of its economy and governance.

He said this at the virtual Opening Ceremony of a capacity building programme for members of staff of Ministries, Departments and Agencies (MDAs), Military and Paramilitary on Digital Literacy, Cyber Security Essentials and Cloud Computing.

The NITDA boss, who was represented by the Special Assistant (Technical ) to the DG, Dr Onimisi Yahaya Mohammed, while underscoring the importance of the training said the agency, as a forward-looking organization, is aware of the relevance of civil servants in delivering government programmes.

According to the DG, the digital transformation efforts of the government cannot be completed without carrying along with the Civil Servants, Military and Paramilitary.

Inuwa further affirmed that the Federal Government of Nigeria is keen on digitalising its activities; for which the MDAs are central to the implementation.

Meanwhile, to institutionalize the digitalization programmes in the Federal Public Institutions (FPIs), the Director-General said NITDA had to set up a Digital Transformation Technical Working Group (DTTWG) whose members are meant to drive down the programmes at a different level of government.

He recalled that so far, the members of DTTWG for 200 Federal Public Institutions have been trained and another batch of 200 is to be trained this year-2022.

“We in NITDA have supported so many FPIs in terms of tools and training, we are already collaborating and will always be willing to partner with stakeholders to support our economic diversification and sustainability plan for the country”.

While imploring the participants to partake fully and transfer the knowledge gained at the end of the training to their colleagues who could not make it to the training, Inuwa pledged the agency’s unflinching determination towards achieving the benchmark of 95% Digital Literacy by 2030.

The Manager, ITIS Department, NITDA, Chinyere Nwankwo, who gave an overview of the Capacity Building Programme made it known that the participants are staff drawn from forty MDAs, Military and Paramilitary who were nominated by their various organizations.

She further explained that the training is structured to be delivered in two batches (Virtual & In-person) with 20 organizations in each.

“Upskilling the 200 participating members of staff will help Nigeria to catch up with the rest of the world in the area of digitization, job creation, technology adaptation and deployment in the workplace”.

Mrs Nwankwo expressed the hope that the first batch which has a number of 100 participants, as with the subsequent batch, will seize the opportunity to effectively learn and afterwards utilize the knowledge gained to achieve the sole aim of the initiative.

Wed May 11 , 2022
Share, like and CommentNigeria’s telecoms regulator, the Nigerian Communications Commission (NCC) will be leading other stakeholders as eBusiness Life Communication Limited hosts young girls in the 2022 edition of the International Girls in ICT Day campaign. The hybrid event, which will hold at the Lagos Oriental Hotel on May 12, […] 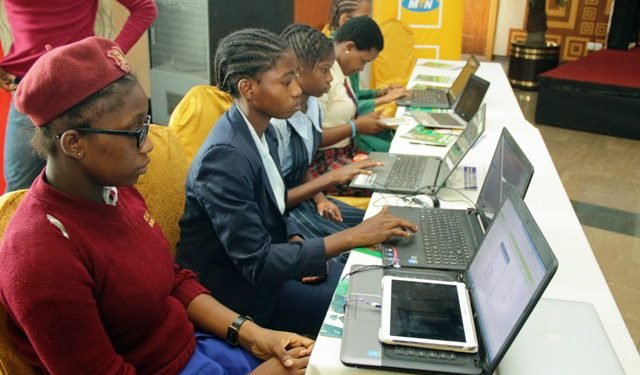