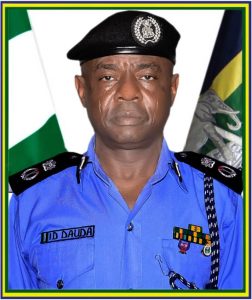 The Inspector-General of Police, IGP Usman Alkali Baba, has ordered the posting of CP Idrisu Dauda Dabban, to Kastina State Command as the new Commissioner of Police (CP) in charge of the State.

The posting follows the elevation of the erstwhile Commissioner of Police in charge of the command, AIG Buba Sanusi, to the next rank of Assistant Inspector-General of Police.

The new Commissioner of Police, CP Idrisu Dauda Dabban, was appointed to the Nigeria Police Force as a Cadet Assistant Superintendent of Police in 1990. He holds a Master’s Degree in Law Enforcement and Criminal Justice from Ahmadu Bello University, Zaria and has attended several leadership and strategic courses within and outside Nigeria. He has equally served in various operational, investigative and administrative capacities within the Force, some of which include DCP Operations in Delta and Enugu State Commands, DC SCID and subsequently Commissioner of Police in Kogi State Command. Until his recent posting, he was the CP Communications, Department of Information and Communication Technology, Force Headquarters, Abuja.

The IGP, while reiterating the commitment of the Police leadership to containing prevailing and emerging crime trends in the State, charges the new Commissioner of Police to consolidate on the achievements of his predecessor in ensuring increased public safety and security of lives and property in Katsina State. He further calls on the Government and good people of Katsina State to give the new Police Chief maximum support in his new role.

The posting is with immediate effect.

MTN Gets A Fresh Style And A New Catchphrase.

Thu Feb 17 , 2022
Share, like and Comment Telecommunication’s giant MTN has revealed intentions to rebrand as part of the company’s “Ambition 2025” strategy, which aims to create “leading digital platforms for Africa’s progress.” The modification was made public after the previous emblem was removed from signage at the company’s headquarters in Johannesburg, South […]