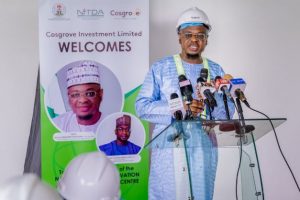 The Minister of Communications and Digital Economy, Prof. Isa Ali Pantami has expressed optimism that the National Digital Innovation and Entrepreneurship Centre once completed would fast-track the implementation of the Nigeria Start-up Bill, as he described the ongoing construction project as satisfactorily on course.

Prof. Pantami made this known after an on-spot inspection of the site.

While noting that the project which is being executed by the National Information Technology Development Agency (NITDA) under the supervision of the Federal Ministry of Communications and Digital Economy is the hallmark of a remarkable partnership between the visionary administration of President Muhammadu Buhari and a wholly indigenous yet forward-looking company – Cosgrove Investment Limited, the Minister averred that the Centre which sits on 1,596sqm of built-up space within the FCT City Centre and comprises of two towers connected across one floor will be the hub for incubating and executing NITDA’s mandate.

“I have visited most of the floors of the National Digital Innovation and Entrepreneurship Centre; there are two buildings that are interconnected, and one of them will serve as the actual National Digital Innovation and Entrepreneurship Centre as approved by the Federal Executive Council (FEC) after my presentation at the 11th of November, 2020 while the second one will serve as the Headquarters of the National Information Technology Development Agency to manage the other centre”.

“I’m very comfortable with what I have seen here and I came to the facility because it is our responsibility to ensure that any approval by FEC under our supervision is being implemented according to the agreement. I can confirm to you that all the specifications of the project are in alignment with what the Council had approved twice, in November 2020 and April, 202”, Pantami assured.

The Minister who was accompanied by the Director-General of NITDA, Kashifu Inuwa CCIE during the inspection at different times engaged the engineers on site and company officials in talks relating to the execution, as he commended the DG, Board and management of NITDA for the progress achieved with an emphasis on the quality of the job done so far.

Pantami who later briefed journalists on the Pros and Cons of the facility informed the press that Twelve Billion Naira (12BN) inclusive of VAT and other taxes is the total sum allotted to the project.

“To be honest, I applaud the judicious way and manner NITDA has been handling the execution of the task, because if it were another institution, the total sum would have been double of it before it would have been executed”, Pantami maintained.

Although the completion date as approved by FEC is thirty-six months, spanning from November 2020 to 2023, Prof. Pantami however said haven taken into cognisance the fact that it is a legacy project of the present administration, the ministry was able to engage the project managers and contractors to speed up the completion timeline in order ensure that Mr President Inaugurates it before the expiration of his tenure.

The Communications and Digital Economy Boss took time to elucidate the benefits of the centre which he said was an idea he conceptualized when he was the Director-General of the National Information Technology Development Agency NITDA and is pleased to see it gradually coming to a reality.

He highlighted the fact that the building will play a significant role in implementing the Nigeria Start-up Bill which was recently passed by the National Assembly and assented to by President Muhammadu Buhari.

“The building floors will be dedicated to training, particularly hands-on-training, which will enable our young innovators to harness their skills and hatch their ideas from conception to impact”.

“This is going to be the centre where we will coordinate the issue of tax holidays for the innovators, pioneer status, and intellectual property among many other benefits. Moreso, we are looking at consolidating on the diversification drive of the Federal Government; by implication, the regulator of Information Technology (IT) has a critical role towards the consolidation of the economic diversification that we have unarguably attained”, Pantami stressed.

The Director-General of NITDA Kashifu Inuwa CCIE was full of appreciation to the Minister of Communications and Digital Economy, Prof Isa Ali Pantami for his leadership and support to the Agency from the inception of the project, getting approvals to where it is, recalled that the project was conceptualized in 2020 to strengthen the Abuja ecosystem.

Inuwa said the edifice will draw in start-ups, investors, multinationals, and government to be in the one space where discussions about moving the digital economy forward will be sustained.

“We are hoping to finish this project within two years. Though it is not an easy task we are working day and night to ensure we meet the expected quality and early delivery of the facility by March 2023 as partial completion will not be accepted”, Inuwa noted.

The DG also expressed gratitude to the Minister for okaying the involvement of an indigenous company in executing the job.

The 4,000 sqm plot for the Entrepreneurship and Digital Innovation Centre, located at plot 1409, CBD Cadastral zone sits the 2-tower edifice; an office complex and a mixed-use building going up to seven and eight suspended floors, respectively

The two towers are linked at all levels, for an overall area of 1,500 sqm and a total of 9 levels (from the basement to roof terraces is to be the digital and innovation hub for the National Information Technology Development Agency (NITDA)

It is hoped that the ICT sector as reported by the National Bureau of Statistics (NBS), played a pivotal role in lifting the Nigerian economy out of recession, recording the highest growth rate in the 4 Quarter of 2020 (14.70%),  and recorded 15.9% growth in the telecommunications sub-sector (the highest growth rate over the last decade) as well as unprecedented generation of over N1Trillion revenue in less than 2 years by the Ministry and its parastatals will be continue to grow exponentially especially as the centre upon completion is expected to offer increased digital trainings to Nigerians.

Thu Nov 24 , 2022
Share, like and Comment The Minister of Communications and Digital Economy of the Federal Republic of Nigeria, Professor Isa Ali Ibrahim Pantami has authored another on skill acquisitions. The Minister who recently released two books: ‘Cybersecurity Initiatives for Securing a Country and‘Datafication of Society to Foster an Internet Economy,’ will […] 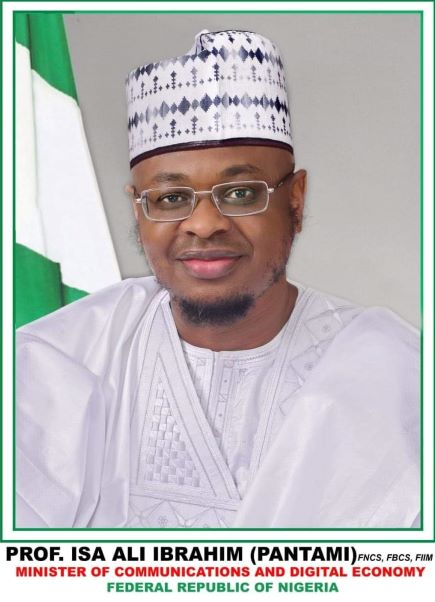