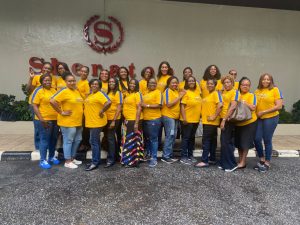 The Class of 1982 of Saint Maria Goretti Girls Grammar School in Benin City has pleaded with the Edo State Government to consider returning the school to the Catholic Mission in order to improve girl child education.

Under the auspices of the Saint Maria Goretti Old Girls’ Association (SMAGOGA), the former students made the heartfelt appeal recently in Lagos, where they celebrated their 40th reunion since leaving school.

Many old girls from all walks of life gathered at the event to reminisce about their time at the school. The reunion’s theme was “Women, Wealth, and Winning.”

Speaking during the programme, Mrs. Grace Bose Ojougboh, member of the alumni association and Deputy Director at the Nigerian Communications Commission, called on the Edo State Governor, Mr. Godwin Obaseki, to consider returning the School to the Catholic Mission towards reclaiming the school’s age-long glory.

“Now, more than ever before, there is a need to empower and raise girls who are pious, confident and equipped with the skill and capacity to function as leaders and nation builders in the 21st century and we believe our alma mater is poised to deliver on this even more with its management being under the Catholic Mission,” Ojougboh said.

She stated that the Class of 1982 has, over the years, joined hands with the national body of St Maria Goretti Old Girls Association to give the school a facelift as well as support the students through award of scholarships and skills acquisition.

Mrs. Ijeoma Isiolu, a seasoned banker and an old girl of the school, lamented on the very poor state of the school since it was taken over by the government. She said the association looks forward to the time when the school will be returned to the Catholic mission.

Henrietta Iweze, a lawyer and member of the Class of 1982, spoke on the need for women to support women and the importance of winning and creating wealth. She emphasised that women should be open to change and stressed the need for women to always give value wherever they find themselves.

Mrs. Maureen Okoro-Sokoh, a human resource consultant and Managing Director, Estymol Group, called on her classmates to use the opportunity of the reunion to really come together and empower each other in different ways.

Speaking in the same vein, Mrs. Ononuju Irukwu, a financial expert and wealth adviser with First Bank of Nigeria who is also of the Class of 1982, stressed the need for women to be empowered through education and financial inclusion.

Irukwu stated that financial literacy opens doors and more opportunities for women and helps them to make informed decisions.

The walk down memory lane by members of Class of 82 brought a lot of nostalgic feelings of joy and gratitude for the wonderful time spent together at the school and the training and discipline they received in their formative years which, they agreed, have moulded them into women of excellence.

The Class of 1982 set also used the opportunity of the reunion to visit the Heritage Homes located in the Anthony Village of Lagos State to reach out to the less privileged in the society while plans are in the works to visit their alma mater in Benin City.

Late Rev. Sister Dr. Henrietta Powers, a member of the missionary order of the sister of Our Lady of Apostles, was the 4th Principal and the trailblazer from 1961 to December 1984 when she retired from service. She managed the affairs of the school and raised women, who have become excellent women, breaking barriers, changing and impacting their communities in all spheres of life.

St Maria Goretti Girls Grammar School in its heydays, under the Catholic Mission, was the school of choice for people, who wanted an all-round spiritual, moral, vocational and academic development for the girl child.

Thu Jul 14 , 2022
Share, like and CommentMTN Group’s Mobile Money Application Interface (API) invites developers from various markets to participate in an Open API Hackathon, with the goal of developing a mobile application that uses MoMo APIs for use in their respective markets. MTN Group Fintech’s second hackathon will take place in the […]