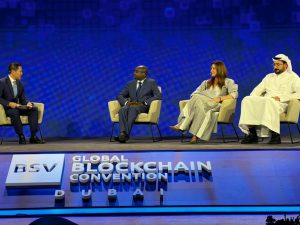 With the significant impact of blockchain technology on the nation’s digital transformation by using it as a platform to sustain the country’s digital economy, the Director-General of the National Information Technology Development Agency (NITDA), Kashifu Inuwa CCIE joined experts from other parts of the world in upscaling blockchain technology to support more transparency, efficiency and productivity.

In aligning with the trending best global practices, the DG participated in the BSV Global Blockchain Convention at the Grant Hyatt Hotel, Dubai, the United Arab Emirates where ideas were shared with world-leading key players in the industry to upscale the public Blockchain ecosystem.

Speaking as a panellist in the session themed “Blockchain for Digital Transformation of Nations” at the 3-day event, the DG reiterated President Mohammadu Buhari’s commitment to diversifying the country’s economy through the adoption of emerging technologies such as the blockchain technology.

The NITDA boss opined that Blockchain technology is an emerging technology which provides a secure distributed ledger platform for seamless transactions which will acquaint people with vast opportunities, enhanced security and easier traceability.

He further stated that in the implementation of the country’s National Digital Economy Policy and Strategy, the Agency under the supervision of the Federal Ministry of Communications and Digital Economy developed a draft bill on National Blockchain Adoption Strategy in creating an economically productive and viable Digital Nigeria using the blockchain technology

Inuwa averred that the document clearly maps out the strategies needed for the adoption of blockchain technology by the Nigerian government and its digital transformation agenda.

The Chief Information Officer of Nigeria while giving insights on the economic thrust achieved through the implementation of emerging technologies in the country however noted that ideas shared at the event will be adopted to upscale and fully exploit the potentials of Blockchain technology in the country.

“As the government, we have the responsibility to make sure Nigerians harness the full potentials of blockchain technology while avoiding its perils”, he concluded. Thank you for visiting this site.
You are visitor number 21,013