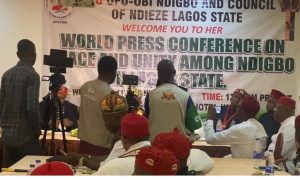 The All Progressives Congress (APC) in Lagos State and a coalition of Igbo unions in the state under the auspices of G50 Ofu Obi Ndigbo and Council of NdiEze, Lagos State have vowed to partner in the development of the state.

The agreement was sealed at a press conference organised by G50 Wednesday and attended by representatives of the APC Lagos State chapter.

Coordinator of G50, Dr Festus Uchenna while commending the partnership noted that it will mark the beginning of better things for the Igbo in Lagos State.

He said the initiative is not just about the b2023 election and the re-election of Gov Sanwo-Olu, but that it would continue to partner with the state government in promoting peace. 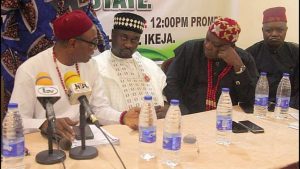 Secretary of G50, Chief Everest Ozonweke noted that the group is all about uniting all the Igbo living in Lagos State.

He said, “The purpose and ideology of G50 are first to ensure unity and progress of the Igbo in Lagos State under the umbrella of G50 and to get all the Igbo groups in Lagos State to come out and vote during the election.

The APC chairman, Pastor Cornelius Ojelabi represented by the vice chairman of the party, Chief Tunde Aboyade said, “We are here to associate and show solidarity with you and assure you that the APC is with you and will continue to support you in all ramifications as long as you are in Lagos State. We pledge our support, the support of Governor Babajide Sanwo-Olu and that of our main principal, Asiwaju Bola Tinubu.” 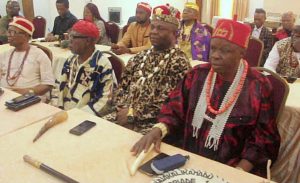 A release signed by Chief Christopher Offia and Chief Remy Anwamele, Chairman and Secretary respectively, the Council of Ndi Eze Lagos State urged all Igbo in the state to abide by and respect the peace agreement brooked by the G50.

It noted that the group respects the democratic inclination of the Igbo but asked those who dissent to channel their grievances through appropriate quarters and warned that anybody that attempts to sabotage the peace would be seen as an enemy.

The release read in part, “We are overwhelmed with joy about the information that all the leadership brouhaha has been resolved and that the elusive lasting peace, harmony and tranquillity have been fully entrenched, upon which we have no option than to follow the bandwagon as the custodians of peace, love and culture among our people.

“This enduring peace nurtured and midwifed via the leadership prowess and acumen of Dr Festus Uchenna and Chief Everest Ozornweke who assembled the top echelon of players and leaders of various Igbo groups in Lagos State who had hitherto been antagonistic of one another and key stakeholders for the first time in the history of the Igbo nation in Lagos State brokered peace among themselves to the acceptance of all concerned.

“We gladly state that the attainment of this feat of bringing various parallel, irreconcilable factions and personalities of Ndigbo groups in Lagos State together to mutually agree to coexist and work in the interest of the welfare and wellbeing of Ndigbo in line with the principles, mandate and code of conduct upon which G50 is anchored which is “OFU obi Ndigbo” would not have been possible if not for the support, kind gestures and wonderful hospitality of Gov Babajide Olusola Sanwo-Olu; For these marvellous exhibitions of handshake across the Niger, we are indebted and we call on our people to rise up to the challenge and appreciate the symbiotic gestures through the ballot boxes in the forthcoming gubernatorial election…

“Being aware of our notorious nature of democratic inclination, we respect unequivocally the opinions of the minority who may be against the peace hitherto entrenched among the ranks and file of our people, and we urge them to abide by the decision of the majority of our leaders, eschew unguided, defamatory and mischievous utterances in the press and social media  and seek proper channels to redress their grievances via official reports and complaints to the appropriate authorities instead of washing their dirty linens in the public…”

In Preparation For The 2023 General Elections, IGP Retrains The Commanders Of 79 Squadron In Tactical Deployments.

Fri Jan 13 , 2023
Share, like and CommentPartners United Nations For Improved Disciplinary Measures The Inspector-General of Police, IGP Usman Alkali Baba, in line with his mandate on training and human capacity development, has commenced a two-week fully residential refresher training for all seventy-nine (79) Squadron Commanders of the Nigeria Police Mobile Force at […] 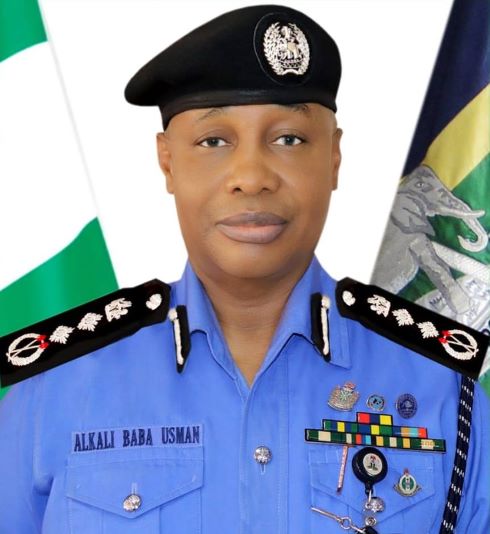