The Executive Vice Chairman of the Nigerian Communications Commission, Professor Umar Danbatta, has said that the level of awareness of the potential of telecommunications products and services is a credit to the media industry which has partnered with the Commission in the regulatory process.

Danbatta was the Keynote Speaker at the dinner hosted by the Board of Trustees of the Nigeria Media Merit Award, NMMA, to flag off the commemoration of the 30th Anniversary of NMMA as Africa’s foremost media excellence recognition institution, at the Lagos Sheraton Hotel on Tuesday, said this is why the telecom regulator holds the media at very high esteem.

At the event where the Director, Public Affairs of the NCC, Mr Reuben Muoka, presented the keynote on behalf of Danbatta, the CEO of NCC sought greater collaboration with the media describing the media systems of communication as central to social progress and are thus critical partners the NCC requires to succeed in its determination to consolidate the gains of telecommunication.

Dwelling on the topic, “The NCC New Strategic Vision (Implementation) Plan (SVP) 2021-2025: A Transformation Agenda”, which signposts the direction of the Nigerian telecom industry in the next five years, Danbatta recalled the trajectory of the evolution of telecoms in Nigeria, with reference to the nation’s showing of a paltry 18,724 telephone lines at independence in 1960 to serve a population of 40 million people, translating to a teledensity of 0.5, to the present time (as at July 2022), when “active telecoms subscribers have grown significantly hitting 209 million from about 400,000 aggregate telephone lines in the country on the eve of concrete deregulation in the year 2000.

“This represents a teledensity of 109.47%. Besides, basic Internet subscriptions have also grown from zero in the pre-liberalisation era to over 152 million. It is also gratifying that the broadband subscriptions now stand at 85 million, representing a 44.49% penetration.”

Today, “the Information and Communication Technology (ICT) sector contributed 18.44 per cent to the nation’s Gross Domestic Product (GDP) in the second quarter of 2022. From this figure, the telecommunications sector alone contributed 15 per cent,” Danbatta said to place on record the unprecedented contribution of the telecom and ICT industry to GDP.

Danbatta also spoke extensively on the policy initiatives of the Federal Government and the continued support of the government as crucial to the accomplishment of the feat in the telecom industry. Giving an indication that the Board, Management and staff of the Commission will not rest on their oars and will continue to re-engineer and promote innovations to make the nation harness benefits that are accruable in a digital economy.

Danbatta said the objective of the Strategic Vision (Implementation) Plan (SVP) 2021-2025 is to consolidate on the accomplishments of the Commission under the SVP 2015-2020, otherwise called The Eight Point Agenda, the forerunner of the SVP 2021-2025, in order to take the Commission to a greater height where it will make even more superlative contributions to the national economy.

Otherwise dubbed the SVP II, the new Strategic Vision Plan 2021-2025 is designed as a transformation agenda for Nigeria’s digital ecosystem. The EVC said, it is reason the new SVP’s focal objectives are to ensure: Organizational Renewal for Operational Efficiency and Regulatory Excellence; Facilitate the Provision of Infrastructure for a Digital Economy which fosters National Development; Promote Fair Competition, Inclusive Growth, Increased investment and Innovative Services; Improve Quality of Service (QoS) for Enhanced Consumer Quality of Experience (QoE), and Facilitate Strategic Collaboration and Partnership.

Danbatta said the significance of telecom as an enabler of other sectors’ growth and its centrality to achieving a better quality of life for the citizens underscored the need for a renewed partnership and collaboration with all media of communication. “For the media, it means the process of news gathering, processing and dissemination will be accomplished faster, thus enabling the media to inform and educate the citizens on happenings around them more timeously, accurately, and adequately towards achieving greater socio-economic development in our country,” the EVC stated.

The event was attended by many stakeholders in the media, including Mr Martins Oloja, Chairman Editorial Board, The Guardian; representative of the government, including the Governor of Lagos who was represented by Olumide Shogunle, the Permanent Secretary, Lagos State Ministry of Information; and traditional leaders, including the Makama Ringim, Alhaji Mohammed Ibrahim, who was Director General of NTA, and equally a former Director General of Radio Nigeria, and who received Special Recognition Award at the occasion.

Fri Sep 23 , 2022
Share, like and Comment Tasks Strategic Police Managers on Professionalism, Compliance with Extant Laws for Credible Elections  Excludes Quasi-Security Outfits from Election Security Management  The Inspector-General of Police, IGP Usman Alkali Baba, in active and strategic preparation for the 2023 General Elections, has along with the Force Management Team, met […] 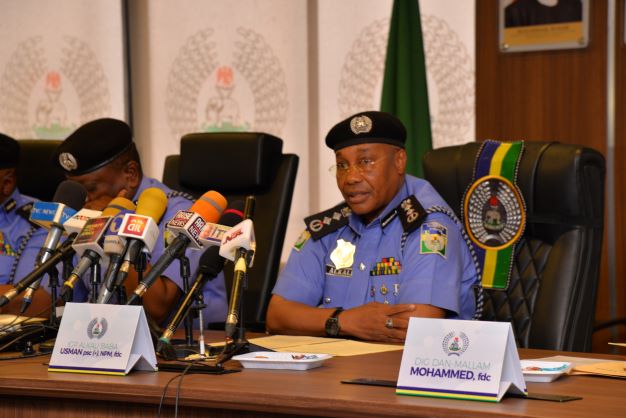