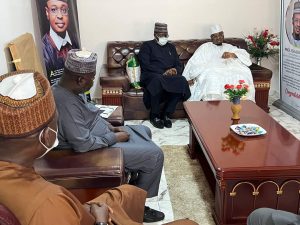 Pantami stated that his late friend, who has since become a brother, is a polymath who has led an exemplary life. The Minister, who spoke in his Abuja office during a condolence visit by the Nigerian Communications Commission’s Executive Management, led by its Chief Executive, Professor Umar Garba Danbatta, said they grew up together and shared fond memories about their backgrounds.

Danbatta had earlier conveyed the condolences of the Board and Management of the Commission, prayed to Almighty Allah to forgive Sheikh Maigona for his shortcomings and reward his good deeds with Aljannat Firdaus.

Sun Jul 24 , 2022
Share, like and Comment Following the fifth Student Union Leadership Summit held at Kwara State University in Malete, Kwara State, Chairman of the Association of Licensed Telecommunication Operators of Nigeria (ALTON), Engineer Gbenga Adebayo, received recognition. The honour was presented to him during the KWASU Students Union Lecture, with the […]