The National Office for Technology Acquisition and Promotion (NOTAP) on May 17, 2022, commenced the zonal launching of an indigenously developed software for the establishment of a database of Nigerian professionals for implementation of Executive Order No.5 (EO5) directive of Mr President.
Speaking at a one-day public presentation of the software in Lagos, the centre for the Southwest Zone, the Director-General of NOTAP, Dr DanAzumi Mohammed Ibrahim said that in February 2018, Mr President, Huhammadu Buhari signed into law the Executive Order No.5 aimed at engaging indigenous professionals in the execution of government jobs for improvement of indigenous skills as well as to protect and encourage the development of local capacities.

According to him, the EO5 is intended to give preference to Nigerian professionals in the execution of government contracts and projects in Science, Engineering and Technology to gradually develop their technical skills well enough to the point of favourably competing with their foreign counterparts.
Dr Ibrahim said that the Order was an initiative of the Nigerian government to set the nation on the path of viable and sustainable economic growth with rapid transformation using the instruments and platforms of Science, Technology and Innovation (STI)

The DG stated that as a regulatory agency, the officer notices the enormous amount of foreign currency Nigerian entrepreneurs expand on the procurement of foreign technologies especially in the area of software, therefore, to encourage the development and utilization of indigenous skills, NOTAP engaged an indigenous Information Technology (IT) company, Cogewox Dot Net limited for development and deployment of a robust database that captures, stores, analysis and reports profiles of Nigerian professionals. He further said that for proper adherents to the Order, Mr President directed Ministries Departments and Agencies (MDA) to engage indigenous professionals in the planning, design and execution of national security projects.

He noted that where expertise is lacking, procuring entireties will give preference to foreign companies and firms that have demonstrated clear and verifiable plans for indigenous skills development prior to the award of such contracts. ” With the signing of Executive Order, companies with the intension of employing foreign nationals on long term work authorisation and requires the grant of expatriate quota will undergo additional extensive scrutiny. According to the Order, companies would be required to employ Nigerians to understudy their foreign experts to enable them to acquire the requisite skills for the eventual takeover of the expatriate positions by a Nigerian counterpart. He added that although this has always been the case, it is our opinion that there would be stiffer scrutiny and monitoring of this requirement for proper implementation.

In his presentation on Database of Experts for Policy Formulation, the former President and Cofounder of the Institute of Software Practitioners of Nigeria (ISPON), Dr Chris Uwaje that NOTAP has demonstrated competence and willingness to launch the country into a technology-dependent nation through the encouragement of software development in the Country.

He said that he had no doubt that NOTAP will religiously implement to the later the dictates of Executive Order and turn Nigeria into a technology hub, adding that the Office should be given every desired support and encouragement by the federal government to ensure the actualisation of its mandates.
He stated that the software is a robust and interactive app that provides a platform for Nigerian professionals to easily engage in registration so long as they have smart internet-enabled devices.

He further stated that Nigeria is blessed with an array of relented researchers and software developers that can seamlessly compete with their foreign counterparts but needs to be given the opportunity to exhibit their competencies.

He commended NOTAP for trusting in the ability and capabilities of the Nigerian software developer by entrusting the responsibility of developing software to drive the software for implementation of EO5, adding that the only way to develop indigenous skills is by believing in the operators of the sector and through patronage.

Thu May 19 , 2022
Share, like and CommentThe Nigeria Computer Society (NCS) has congratulated the National Information Technology Development Agency (NITDA) on receiving the National Productivity Order of Merit Award from the President of the Federal Republic of Nigeria, General Muhammadu Buhari GCFR, and has deliberated on key areas of collaboration. While receiving delegates […] 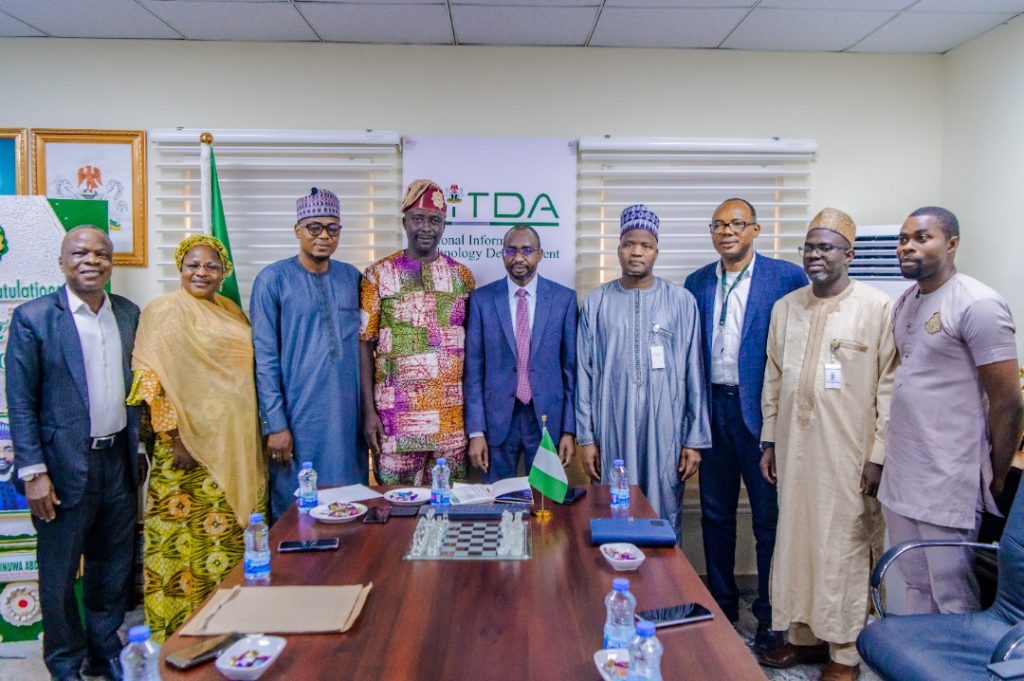