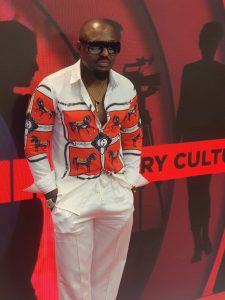 Addressing Top Journalists & Media influencers in Lagos yesterday, Amb. Cornell Udofia said, Nollywood’s Glamorous bad boy, Jim Iyke is out again with a blockbuster that will thrill movie lovers for a long time & all hands are on decks to stage a world class Premier that will be remembered for years to come.

According to the award winning Media Strategist & United Nations @ Cornell Udofia, Jim Iyke being a perfectionist at what he does both on Movie & Business world has been visiting his fans and Friends personally to deliver their IV boxes to them.

It will be recalled that  on July 5, 2021, Jim organised a private screening of the new flick tagged ‘Bad Comments’ for the media and his selected friends.

This was in preparation of the world premiere coming up on August 27.

The show which gathered journalists and entertainment enthusiasts at the EbonyLife event centre Victoria Island Lagos was a good opportunity to see the latest work from the A List super star who for so many years have been one of the best and outstanding products of Nollywood with scores of award winning movies and laurels to his credit.

The new ‘Bad Comments’ chronicles the story of a wealthy young actor and how he navigates the stormy waters of online bullying, love and betrayal.

It’s a fine twist that reveals much about the current realities of the modern times. As a fast-paced fusion of drama and thriller, with a blend of momentary comedic relief, it was inspired by true-life events and will be a delight to see by every member of the family.

The movie which preaches love, understanding, tolerance, decorum and openness was shot with some of the best equipment and by some of the best creative eggheads in the industry making it nothing short of an Hollywood standard.

Little wonder, the premiere will also be done in Europe & America too.

The top movie was directed by the highly talented Moses Inwang and Produced by ace actor Jim Iyke.

The move starred top acts including the following:

The very intriguing latest blockbuster filled with action, suspense and charged emotions from the stable of the very versatile Jim Iyke will be out in all the cinemas in Nigeria and outside the shores on August 27th 2021.

Udofia founded up by advising those who have gotten their pass to come with thier nose Mask as all covid-19 protocols will be observed.

Sun Aug 22 , 2021
Share, like and CommentThe Executive Vice-Chairman and Chief Executive Officer of the Nigerian Communications Commission (NCC), Prof. Umar Garba Danbatta, has identified major benefits in promoting digital literacy in the country. Delivering the first Annual Lecture of the Bichi Emirate titled, “Digital Literacy as a Veritable Tool for Social and […]