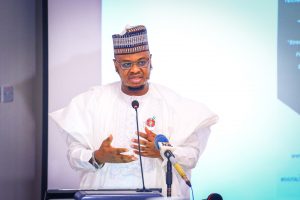 The Federal Ministry of Communications and Digital Economy and its departments and agencies have collectively generated a total of N1.05 trillion in the last two years.
Minister of Communications and Digital Economy, Dr Isa Pantami, disclosed this on Thursday during the 12th batch, virtual commissioning of eight projects in Abuja.
Pantami said the ministry and its parastatal agencies got a major chunk of its revenues from the sale spectrum allocation.
“The Ministry and its parastatals have generated over N1 trillion for the Federal Government in less than two years, this translates to an average of about N44 billion every month, or over N1.4 billion every day.
“For example, about N360 billion of this revenue was largely from Spectrum allocated by the National Frequency Management Council (NFMC) to the Nigerian Communications Commission (NCC) and National Broadcasting Commission (NBC) for commercial purposes.
“Another, over N600 billion was paid by ICT Companies to the account of the Federal Government through the Federal Inland Revenue Service (FIRS),” he said.
According to him, over N94 billion was generated for the government, and approved by the National Assembly in line with relevant laws, as part of the 2020 appropriation for personnel, capital projects, capacity building, interventions, etc.
He thanked the Chief Executive Officers (CEO’s) of the parastatal agencies, stakeholders, partners and all who contributed one way or the other to the success story of the ministry within the last two years.
“The IT Projects Clearance Programme also saved over N5billion for the Federal Government.”
“I wish to thank all our esteemed partners, stakeholders and members of the Communications and Digital Economy family for supporting us in the last 2 years.
“We look forward to your continued support and partnership.
“The CEOs of all the parastatals under the Ministry have been committed to their responsibilities and I commend them for this.
“I also urge them to redouble their efforts in ensuring that we keep up the good work of developing Nigeria’s digital economy,” he said.
The Executive Vice Chairman (EVC) of the NCC, Prof. Umar Dambatta, and the Director-General, National Information Technology Development Agency (NITDA), Malam Kashifu Inuwa, thanked the minister for the feat in project executions.
The duo also said the projects would help the government in its digital economy drive.
The eight projects commissioned are: Emergency Communications Centre (ECC), Makurdi, Benue State; Virtual Examination Centre, College of Education, Argungu, Kebbi State; and E-accessibility Centre, Alderstown Schools for the Deaf, Warri, Delta.
Others are: E-Health/Data Sharing Project, Leko Abdulrahman Hospital, Daura, Katsina State; Digital Economy Centre & E-Learning Facilities, Ogba Grammar Shool, Lagos State; and Digital Economy Centre & E-Learning Facilities, St Paul Secondary School, Eke, Enugu State,
NAN reports that Digital Economy Centre & E-Learning Facilities, Federal Character Commission, Abuja; E-Accessibility Centre, Bauchi State Orphans and Vulnerable Children School, Bauchi State, are also listed.a