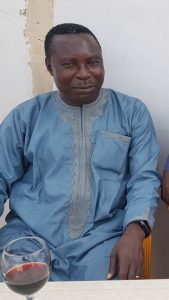 A security management consultant and President of Ebonyi Development Association in Lagos;  Dr. Felix Amah Nnachi has called for absolute independence of the Nigeria Police Force from being an extension of the Presidency whereby authorities of the Force are always doing the bidding of the President rightly or wrongly.

Speaking with journalists at a social function in Lagos on Wednesday, Nnachi; a highly experienced and distinguished security practitioner pointed out that over the years many cases of insecurity threatening the unity of Nigeria would have been nipped in the bud if police were allowed to act decisively without interference from the Presidency.

According to him, “Nigeria’s insecurity problem lies largely with the interference of political leadership in police activities.  We must have a police which is independent. We need a police that will have the strength to even correct the President or Governor who wants to exhibit arbitrary orders.  We need a police that would act strictly in line with the provisions of the Constitution of the country and not on the whims and caprices of the President or Governor.”

On the general insecurity in the country, the Ebonyi Development Association President has this to say: “I feel sad with current state of insecurity in Nigeria. Unequivocally, I would say that it is a total failure of governance.  It needs urgent attention because of the danger it is causing.”

He would not want to believe that the Nigeria’s military is incapable of bringing the insurgency in the North to an end as the military has what it takes in terms of professionalism to defeat the insurgents.  Nnachi blamed the endless state of the insurgency on lack of political will and insincerity of our leaders who seemed not really determined to stamp out Boko Haram elements.

In his words, “people in authority should be able to give the right command and not to teliguide  the troops in a manner that makes the insurgency to linger.”

With many years of security training in United States of America and elsewhere in industrial security activities after serving in the Nigeria Police Force, Mayor Nnachi has rightly hinged the arms proliferation regime to Nigeria’s porous land borders.

“When I say that insecurity in Nigeria is as result of failure in governance, one has to look at the issue of our non-delineated borders. Anybody can walk in and out. We have the men of immigration, customs, police and so on at the borders but because of the personal gains of what they want to get, they collect bribe from arms smugglers who come into the country with deadly weapons.”

According to him, even though President Muhammadu Buhari appointed a retired military officer to head the Customs Service with the aim of stamping out corruption in the Service, the situation has not changed. The borders are still open and arms are coming in.”

To stem the tide of this ugly occurrence, he has posited that “we must build a functional structure in governance that every body would understand.  These days if you are traveling to the South East of the country, you will find Customs officials checking and impounding vehicles on the road.  These are vehicles that have been cleared at the ports by the same Customs Service.”

As the spate of insecurity in the country is increasing by the day, Nnachi has expressed dismay over the prevailing use of mobile police men. He decried the common practice of sending mobile policemen to guard politicians and other sundry important persons whereas they were meant to take charge of riotous situations and any semblance of such across the country.

“We have what is called  the Special Protection Unit (SPU) of the Nigeria Police.  The unit is responsible for VIP guard duties and not mobile police squad created to serve other purposes.”

Speaking on the increasing restiveness in the South East and activities of the Eastern Security Network, (ESN) Nnachi has this to say: “I do not know what their objectives are, but from what I read, I believe the ESN is created to Foster peace in the East and prevent encroachment of the hinterland by herdsmen. They want to put a check on the activities of the herdsmen. In the East, we have a peculiar culture where you have the vigilantes at the local level.”

“I must say that if the Southeast governors had taken proactive step in the area of security of lives and property in the East, they would have adequately contended with the level of insecurity there. So what is happening in the East is just unfortunate.”

“From what Nnamdi Kanu said in the social media, ESN is the operational arm of the banned IPoB and so what they are doing is to ensure that security of life and property is sustained.  However, I must caution that their activities should be within the confines of the law governing the state.”

The security chieftain went further to condemn any arbitrary step of burning police stations, attacking of security agents and so on.  He has therefore advised the South East Governors to dialogue with the ESN members with a view to finding out what the problems are, and how best to collaborate in solving such challenging security problem.

Paying tribute to the Governor of Ebonyi State, Engr (Dr.) Dave Nweze Umahi, the security consultant noted that since he assumed office Ebonyi has been largely transformed in terms of infrastructural development.

Doctor Nnachi pointed out that the world class motor ways in Ebonyi in current time were constructed by Umahi’s administration which has also begun building of a university, international airport, hospital and ecumenical centre of global standard.

He pointedly condemned the lopsided nature of Federal appointments under the leadership of President Buhari who could not bath an eyelid to appoint all service chiefs from one section of the country soon on his assumption of office.

He has therefore called on Nigerians not to remain complacent when certain things are going wrong but to speak out. Nnachi emphasised the fact that restructuring is key to the future survival of Nigeria as a player in the global arena.

He is an experienced Security professional with demonstrated history of 15 years of service in the Nigeria Police Force and not less than 20 years as Chief Security Officer in various sectors  such as financial, aviation and energy at one time or the other.

Over the years, he had attended no fewer than fifteen international seminars, workshops  on security related issues.