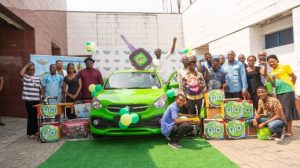 Port Harcourt-based Electrical Engineer, Ime Etukudo, brimmed with joy and excitement on Tuesday as he received the keys to a brand-new car from telecommunications giant, Globacom.

The 39-year-old indigene of Ikot-Ekpene in Akwa Ibom State who sold his old car only last year said at the prize-presentation ceremony held on Tuesday, January 17, 2023, at Gloworld, Aba Road in Port Harcourt, Rivers State, that Glo had made him a proud owner of a brand new car which he scarcely dreamt of in the new year.

“When I got a call from a Glo official, my first instinct was that it was a fraudster, but when the caller insisted that I should come to the Glo office and even said I should look at the video of the office on my Whatsapp, I became convinced and I screamed. My fellow workers immediately joined me in celebrating, while some volunteered to follow me to the Glo office. Immediately, I called my wife to break the good news to her”, he said. 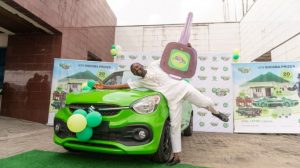 Over 70 other ecstatic winners of different prizes including power generators, sewing machines and rechargeable fans were at the venue to receive their prizes. Many of them expressed appreciation to the mobile network operator for being magnanimous to its subscribers through the Festival of Joy promo.

A special guest at the ceremony and a member of the Rivers State House of Assembly, Hon Azeru Opara, commended Globacom for its commitment to its subscribers and its determination to empower them by giving back to them. He appealed to other corporate entities to emulate the good gestures of the network.

Globacom’s Regional Manager, Port Harcourt, Mr Augustine Mamuro, called on Glo subscribers to avail themselves of the opportunity of the promo to become lucky winners of the expensive prizes. “You could be among the next batch of winners. Simply dial *611# to join the promo and keep recharging for voice and data (as desirable) during the promo period in order to be eligible to win the prizes on offer”, he opined.

NCC Updates Its MOU With The Lottery Commission