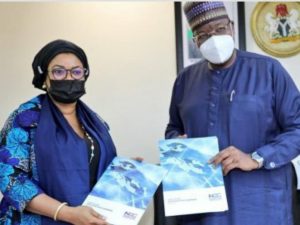 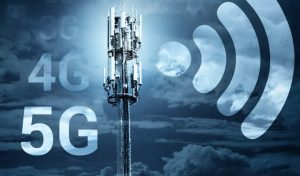 The MoU signing ceremony was the high point of discussions by the two organisations on how to relocate the  NG-1R satellite of NigComSat to the standard C-band 300MHz (3.9GHz – 4.2GHz) portion of the band, which is considered more suitable in terms of satellite service offering because of the advantage of cheaper terminal devices for end users.

Accordingly, such relocation will leave the non-standard C-band 400MHz (3.5GHz – 3.9GHz) portion of the band for 5G use while the cost of relocating the NG-1R is expected to be offset from the proceeds of the auction of the 5G spectrum.

Speaking at the epoch-making event at the Commission’s office in Abuja on Wednesday, May 5, 2021, the Executive Vice Chairman of NCC, Prof. Umar Garba Danbatta, appreciated the leadership of NigComSat “for demonstrating that the interest of our dear country is paramount to our organisational or personal interest”

According to him, the Commission initiated negotiations with NigComSat to make some adjustment to its satellite operation and release part of its spectrum holding in the band to facilitate the deployment of 5G in Nigeria.

Thu May 6 , 2021
Share, like and Comment MassChallenge, a global network of zero-equity startup accelerators, and the National Information Technology Development Agency (NITDA) announced last week a partnership to catalyze and support a national startup community in Nigeria. MassChallenge and NITDA have closely aligned goals to stimulate economic vitality and job creation in Nigeria by catalyzing […]

Thank you for visiting this site.
You are visitor number 21,009