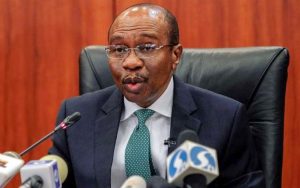 The CBN explained in detail its directive to banks to desist from transacting in and with entities dealing in cryptocurrencies.

The Central Bank of Nigeria, in a press release dated, the 7th of February 2021 has explained in detail the reason for its directive to Deposit Money Banks (DMBs) and other financial institutions to desist from transacting in and with entities dealing in cryptocurrencies.

Issuing a press statement, the CBN said it felt the need to provide further justifications about its position to the general public.

The press statement began with the CBN detailing the nature of cryptocurrencies stating that “Cryptography is a method of encrypting and hiding codes that prevent oversight, accountability, and regulation. While there are a number of cryptocurrencies now in circulation, Bitcoin was the first to be introduced in 2009, and now accounts for about 68 percent of all cryptocurrencies.” Even though the circular of February 5 has sparked a lot of reactions, the CBN makes it known that its recent restriction is not new, but only a reminder of the earlier circular that was dated January 2017. “As regards our recent policy pronouncement, it is important to clarify that the CBN circular of February 5, 2021, did not place any new restrictions on cryptocurrencies, given that all banks in the country had earlier been forbidden, through CBN’s circular dated January 12, 2017, not to use, hold, trade and/or transact in cryptocurrencies,” it stated.

The apex bank further stated that the prohibition of cryptos was not exclusive to Nigeria, as certain levels of restrictions on financial institutions facilitating crypto transactions have been applied in several other countries around the world.

“This is far greater volatility than is found with normal currencies. Let us now

turn to some of the justifications for CBN’s recent policy reminder. A perfunctory reflection on the definition of cryptocurrencies can already reveal several problems.”

The Nigerian leading financial regulator also spoke on the fact that some of these cryptos are issued by unregulated and unlicensed entities which begs the question of legality. It also claimed that cryptocurrencies have been used to finance several illegal activities including terrorism and money laundering.

The question that one may need to ask therefore is, why any entity would disguise its transactions if they were legal. It is on the basis of this opacity that cryptocurrencies have become well-suited for conducting many illegal activities including money laundering, terrorism financing, purchase of small arms and light weapons, and tax evasion.” The CBN stated that a significant amount of people used it for speculative purposes rather than payment, citing the flagship crypto model as an example.

“More also, repeated and recent evidence now suggests that some cryptocurrencies have become more widely used as speculative assets rather than as means of payment, thus explaining the significant volatility and variability in their prices.

“Because the total number of Bitcoins that would ever be issued is fixed (only 21 million will ever be created), new issuances are predetermined at a gradually decelerating pace. The Bank concluded by re-emphasising its responsibility to protect investors from a high probability of losses that may arise from dealing in cryptos. The CBN said it would continue to educate Nigerians on the disadvantages of cryptos in the financial system.

“Due to the fact that cryptocurrencies are largely speculative, anonymous, and untraceable, they are increasingly being used for money laundering, terrorism financing, and other criminal activities. Small retail and unsophisticated investors also face a high probability of loss due to the high volatility of the investments in recent times.

In light of these realities and analyses, the CBN has no comfort in cryptocurrencies at this time and will continue to do all within its regulatory powers to educate Nigerians to desist from their use and protect our financial system from the activities of fraudsters.”

Tue Feb 9 , 2021
Share, like and CommentMoving a step ahead and creating awareness campaign, the Managing Director of the Lagos State Waste Management Agency, LAWMA, Mr. Ibrahim Odumboni, is inviting all stakeholders both in the public and private establishments, Estate Managers, Recyclers and everyone interested in the business of recycling to a one […] 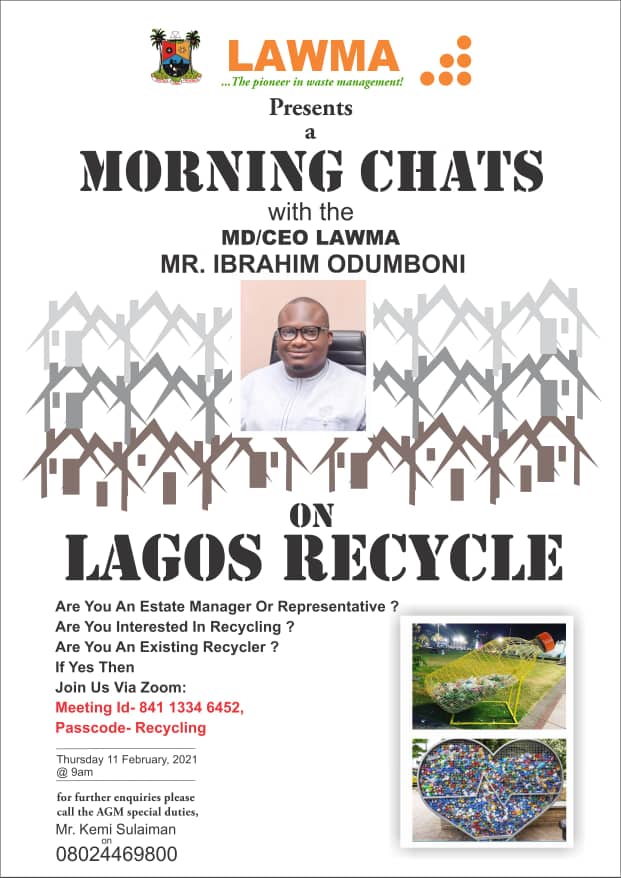